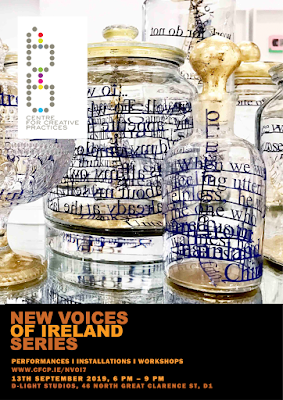 Dublin is a cacophony of sound and the most noticeable thing for me are all the different languages and accents you hear walking down the street.   So an exhibition of immigrant artists and connected themes was a perfect end to our day in the city last week.

New Voices of Ireland is run by the Centre for Creative Practice, an organisation in Dublin who facilitate immigrant artists and local artists working with immigrants, helping them integrate into the arts scene in Ireland and helping them get their work out there.

The opening speaker Ailbhe Murphy, an Irish gay activist, was very eloquent and asked an interesting question about the word immigrant - if we went to work in New York say, would we be immigrants?  Probably not ... We'd more likely just be people who have moved to NY for work.   So why is it different?  in a country who's people have been so badly treated down through the years as emigrants, why are we so bad at welcoming this new wave of people to our shores.

My friend Csilla from Hungary is a poet and film maker writing in English.   She was one of 10 artists selected for this exhibition and it was a very inspirational evening.  Ranging from a play, a monologue, photography, architecture, film, and a very unusual installation of written words, the show was varied and of the highest standard.

One who really caught my attention was Nicola Anthony who is based in London, and takes stories from refugees and immigrants and turns them into mini works of art - words carved in bronze, put in a bottle with a clock mechanism and sometimes with sound - I found it incredibly moving.

Nasrin Golden  from Iran, takes items from her home and turns them into large scale photographs that  end up resembling Persian carpets - beautiful work.

She says: "The project uses images from the past, the longed for. However, they are shaped by the experience of cultivating a new identity in the here and now,  mirroring and duplicating in an attempt to replicate the identity of the observed and create the new. Questioning the order of form in the world around us by surrounding our self with perceptions of our own identity."

Csilla Toldy presented two short film poems about Belfast - the changing view of the city - an outsider looking in.   They're not up on her website yet, but it was interesting seeing what an newcomer sees of our city - I tend to not see the mundane side of it and only view the nice bits, but she very cleverly highlighted the similarities between the two sides of the still divided town.  This is one of her other short film poems. 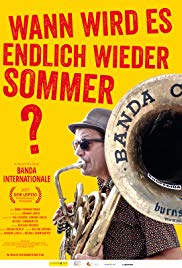 Unfortunately I didn't get time to view "Still Waiting for the Summer" by the German film makers Barbara Lubich and Michael Sommermeyer, documenting how a musical group made up of people from several different nationalities, challenged the very strong right wing element present in Dresden where they all live.   Well worth watching I'm told.   Over 30% of people in Dresden voted for the right wing Deutschland fur Alles in the last election - a very scary thought.

All of the pieces presented on the night were very interesting - the other artists were Mirjana Reneduzic an actress from Croatia, Romi Cruanas a theatre director from South America, Leia Mocan who presented several pieces made from recycled waste,  Irish digital artist Joe Ryan who looked at the point when an old building is taken over by a new structure and how it changes the community.

Lots of food for thought.