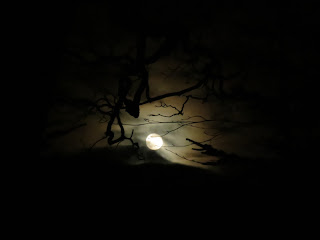 spectacular moonrise behind the house this weekend
The start of Spring, the celebration of the goddess and saint - Brigid's Day is well marked here and celebrated as Imbolc in communities around the world.

Here is a short video poem for you to enjoy - At Bridget's Well .  commissioned by the Ministry of Foreign Affairs and the Museum of Literature Ireland to celebrate St. Brigid's Day 2021. They have collaborated on ‘Three Poems for Brigid’, a series of three short online films. Each film showcases a poet and a spoken word performer, and is based around one of the three aspects of Brigid as the triple goddess of Poetry, Healing, and Craftwork. 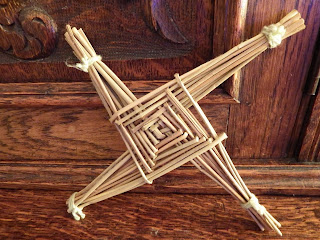 Hopefully I'll get out for some new rushes this weekend if the weather picks up or get given a fresh Brigid's cross - time for renewed energy.   I love the shape, that it's the circle of life.
And an old tradition called 'bratog Bride' (Brigid's scarf) says to leave out a piece of cloth or a scarf overnight to be blessed by the goddess/saint as she passes.   The cloth can then be used to heal sore throats and headaches.
The first time I'd heard of this was two years ago when we were at Annaghmakerrig - everyone tied a piece of cloth to a tree at the door (there were only a couple left when I went to photograph it in the morning) - I still have mine in the house somewhere - just in case;) 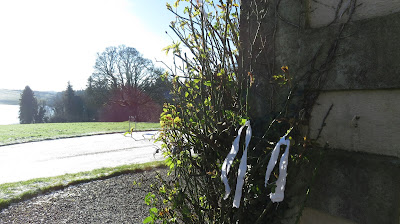 And finally, although Holocaust Remembrance Day has passed, I'd like to leave you the link to 'Here I Stand' - a video poem by my friend Csilla Toldy who won a commission by the NI Executive and the NI Arts Council to produce a piece to mark the day.  Her mother remembers the children being being taken away from Budapest and as part of her research into the video poem she and her mother revisited Auschwitz.
Happy St Brigid's Day.