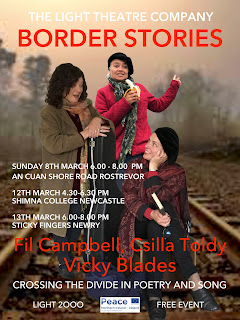 Just a heads up about a show I'm doing locally here at the start of March.

I've written about The Emigrant Woman's Tale which I've co-written with Hungarian poet Csilla Toldy - it tells the story of her escape from behind the Iron Curtain as an 18 year old, juxtaposed with my growing up on the border here before and during the Troubles.   We come from opposite sides of Europe, one from the country, one from the city, and have crafted a very nice show from our music and words.
We recently performed the show in Dundalk and had a lovely review of it ....
"The Emigrant Woman was fantastic. We saw it in Dundalk & we thought it was amazing. A great & true story with amazing music, we highly recommend everyone to go & experience it".
Bernadette & Dixie

We will be in Derry on Friday 6th March and in Armagh on Saturday 14th March.

Now we've extended it into Border Stories to include a short dramatic piece about homelessness, entitled Bananas!, also written by Csilla and performed by Belfast actress Vicky Blades.  These shows will be followed by a discussion chaired by award winning journalist William (Billy) K Graham.
Entrance is Free, supported by the European Union's PEACE IV project.

Borders and homelessness are so much in the news at the moment and we are looking for more venues to take particulary The Emigrant out to - so if you've any ideas please get in touch.