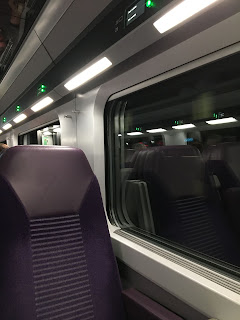 This week I've been up in Belfast 3 times and for the first time I've had  a chance to use my new free pass on the train - we don't have a great train service here in Northern Ireland, except for the satellite towns around Belfast and the main connection between Dublin and Belfast which thankfully runs through our local town of Newry and is really good.

Tom and I headed up to #OutPut Belfast - a day long music business conference on Thursday and it was such a pleasure to sit on the Enterprise, have a cuppa, chat through stuff and feel like you were citified for a day with no worries of parking and traffic.  The conference was quite good, although full of wide eyed youngsters - we both felt a bit jaded along with the other few old hats whom we met there.  It also felt very London centric so I was delighted to hear our Arts Officer talking on one of the panels about our unique sound over here.   There's a fantastic new music scene which I'm really out of touch with as it doesn't really impact on our music at all, but some great bands to watch out for and hopefully another Snow Patrol or Soak or Ro will turn up out of here.

Then back again on Friday with Csilla to pre-record an interview about The Emigrant Woman's Tale for the BBC.  We're bring the show to Derry on 6th March and then Armagh on 14th so this radio programme will go out on the 29th February - a lovely piece done down the line with Eve Blair, the presenter in the studio in the North West and us playing and singing in Belfast.  There's a piano backing that I wrote for one of Csilla's poems - Sub Rosa, which is written directly about her experience of crossing the Green Border past the Iron Curtain from Yugoslavia into Italy - however I don't play piano that much anymore and we're doing these shows only with guitar - so my nerves were a bit on edge yesterday having to remember that the studio piano is not like my old monstronsity in the house that needs the life hammered out of it to get a decent sound.   But a few takes did the job.

I love the feeling of walking in the city - there's an energy which doesn't live in country villages and I easily reach my steps target for the day and come home with a smile on my face even after dragging the heavy guitar case around.  Having grown up in the country I've always preferred cities but city born hubby much preferred to get out and into a small town.  I think the train pass will be used more frequently in the coming months.  Love it :)