Joining in today with Kate at I Live I Love I Craft for the monthly Photo Scavenger Hunt - come along for a wee peak at what everyone else has put up to illustrate the words for this month.

For me, this should really be - where was the most ludicrous place that things have turned up !!  Like finding my phone in the fridge 24 hours after I'd most definitely had it stolen!!

But I reccently found this newspaper cutting - I thought all my old clips had been thrown out - I won a talent compeition back in my late teens and was invited back as the main guest the following year.   In between times I'd met my two lifelong friends Nigel on the left and Willie on the right and we formed a band called Misty Morning - the name came form the title of a song I'd written with a school friend.   You'd think butter wouldn't melt in our mouths LOL    We played together with an added bass player until I left for the middle East in 1980.   Nigel still works in the business as a music promoter and Willie owns a pizza company.  It's definitely time for a catch up.

I got a glimpse into the print workshop last week at TGC - a wonderful thing that means very little to me.   We've been watching Anne With An E on Netflix - the new Anne of Green Gables - and it's wonderful .   A printing press has been featuring heavily over the past few episodes in that too.
The artist in Annaghmakerrig was an American based in Paris and she very kindly let me have a look in to see the machinery - I would have loved a day playing in there. 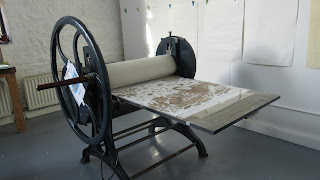 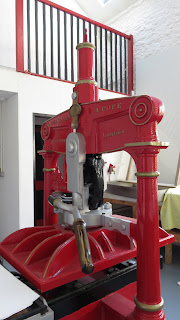 A reminder of warmer days .... the start of our festival in July is a picnic lunch up in the meadow that gives the Festival its name - Fiddlers Green.   This is a meeting place about 600 feet up the slope of Slieve Martin which would have been the crossroads on the old road from Newry to Kilkeel.   They say Fiddlers Green is where fishermen go to heaven.

Here, festival chairman and folk activist Tommy Sands is opening proceedings with a song and a welcome - the session lasts for 2-3 hours and usually there'll be performers from more than 15 countries taking part - last year we counted 17 nationalities. 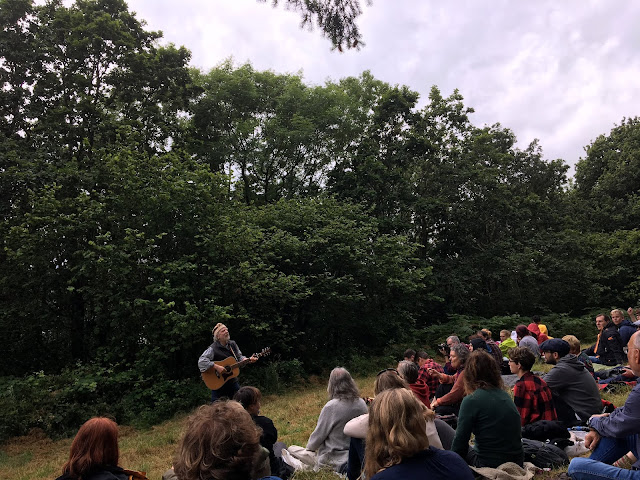 Migrant's Day was on the 18th December.

To mark it my friend Csilla Toldy and I ran an event called This Is Home to raise money for the homeless in our local town and invited people from as many nationalities as we could find in the area to perform a song or a poem or a piece with special meaning to them.  I'm borrowing some photos from my friend Belinda at Good Craic Gifts - she's from Australia and had us all joining in on an Australian version of Jingle Bells to wind things up.
All performers spoke in both English and in their own native language - We had readers from Poland, Iran, Hungary, Austria, Germany, France - Den read some of his lifestory from being a captive aboard a fishing trawler off shore in Camobdia, a Lebanese girl sang and several local performers sang songs about emigration, this being a country where that theme is so much a part of our history.  At the end we sang Silent Night in 6 different languages and the Syrian ladies who run the foodbank in Newry joined in with us.  The venue The Rostrevor Inn where we hold most of our events put on a spread of mostly Polish food which was enjoyed by everyone - a great lead up to Christmas which will hopefully become an annual event.

Frost in the morning
The pink skies in the mornings in the middle of January weren't the best harbingers - shepherds warning and all that ... but seeing the moon over a frozen pond with that tinge of blue in the sky lifts my heart. 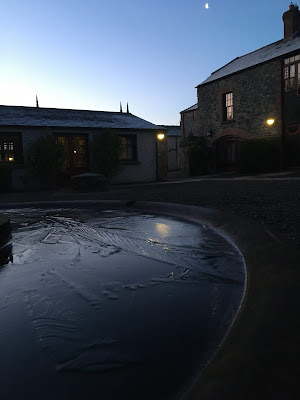 and I had to add in a wee pic of this cute birdhouse outside our cottage window at Annaghmakerrig. 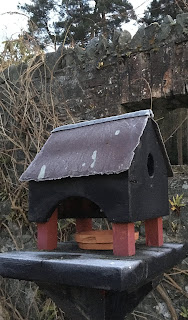 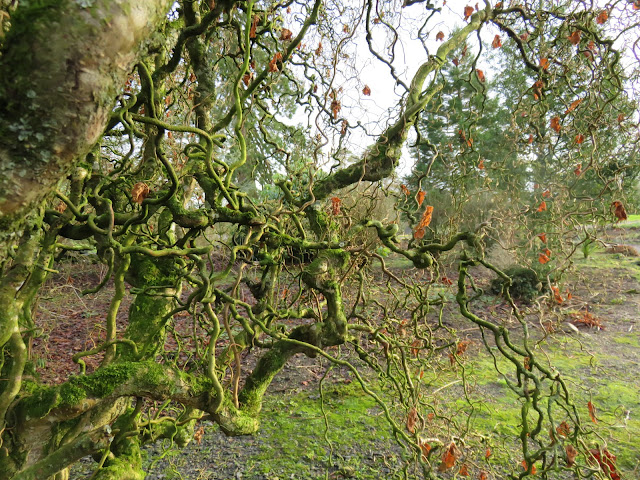 Two of my favourite things coming together - curly trees - hazel I think that one is or is that willow?  Whichever, it's curly and that delights me.   And secondly, the colour of that moss, glowing in the afternoon sun.   Filters haven't entered my photography yet so that's au naturel.

The weather here has been so typically January these past weeks - storms and lots of rain - and then the blessing of a warmish, blue-sky day for a walk in the fresh air.

Thanks to Kate for keeping this lovely hunt going - it's always a challenge and always fun to see what everyone else has put up for the prompts.