I always thought this was a day just for school kids to get dressed up but it's given me a chance to do another update to my Reading My Way Around the World challenge - follow the link to get the full list for my challenge to read a country from as many countries in the world as I can manage - no time limit - and I'm taking a lot of ideas from a great blog called TaleAway where Ash sets a world reading challenge every year with 52 books from 52 different countries. 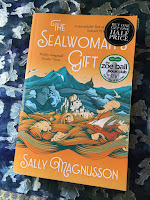 1627 - In a notorious historical event, pirates raided the coast of Iceland and abducted 400 people into slavery in Algiers.   Among them a pastor, his wife, and their children.

In this debut novel the writer imagines what history does not record:  the experience of Asta, the pastor's wife, as she faces her losses with the one thing left to her - the stories from home - and forges an ambiguous bond with the man who bought her.

Liberia
She Would Be King by Wayétu Moore **** 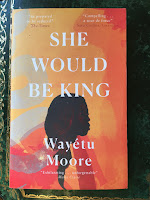 This is a strange book - I enjoyed it, but I was a bit bewildered by it at times.
It's a mix of fantasy realism and historical fact relating to the creation of the new country of Liberia.  It focuses on three characters who all have special powers and have come from backgrounds of all loss and tragedy.
Here's what the cover notes say:
In the West African village of Lai, red-haired Gbessa is cursed with immortality at birth.  On a plantation in Virginia, June Day struggles to hide his extraordinary strength from the brutal slaveowners.   High in the Blue Mountains of Jamaica, Norman Aragon discovers he can fade from sight at will.
Cast out, forced to flee, sent away, they are drawn together in the tumult between settlers.   Norway
The Orange Girl by Jostein Gaarder ** 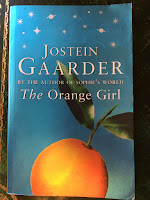 This is a very short book - a sort of modern day fairy tale.
"My father died eleven years ago.   I was only four then.  I never thought I'd hear from him again, but now we're writing a book together."

Georg's grandmother finds some papers stuffed in a chair that are a letter to Georg written shortly before his father died.   It's the story of a girl he sees and becomes besotted by and asks the now older son to help him solve the riddle. 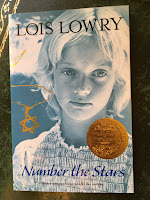 This is a Young Adult novel telling the story of the Danish Resistance during World War 2 and their plan to smuggle the entire Jewish population of Denmark, nearly seven thousand people, across the sea to Sweden.   Told through the eyes of one 10 year old girl.    A part of history I knew nothing about.
And my top selection from this group of books
Kenya/Liberia/America and others
The Shell Collector by Anthony Doerr ( Short Stories) ***** 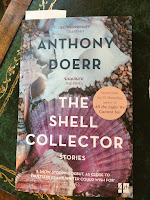 I've not been a fan of short story collections but seem to have been reading more of them in recent years.   And this one, as the critics said, was Exquisite.    Anthony Doerr wrote one of my all time favourite books "All the Light We Cannot See" and he has a beautiful way of writing. This collection starts with the title story which is set in Kenya and is a story of a blind shell collector who is an expert in his field. There's a story about a Liberian refugee; a couple of stories about fishermen in America - just a lovely collection.   5 stars from me.
So, I hope you enjoy your reading and I hope there's a suggestion or two here for you.  I'm nearly caught up to date with my list and if you have any good suggestions for me of books you've enjoyed you know I'd love to hear.  Are you a fan of short stories?  or fantasy realism?
Happy World Book Day